The word “Cahors” comes from the French city’s name Cahors and in 1971 the wine “Cahors” became a protected name.

Cahors is made from Malbec grape variety from the 13th century. At least 70% of this grape variety gives prune tones to the wine. Also additives of the Tanna and Merlot grape varieties are permissible. The wine is dry, with 12-14% of alcohol.

Pastoral, which means Easter, is a Moldavian word, an alternative to the word Cahors.

Pastoral or Cahors is a visiting card of Moldova. Since 1945 this wine has been made only from Cabernet Sauvignon grapes.

But since February 2013 the Agreement between the Republic of Moldova and the European Union regarding the protection of geographical indications of agricultural and food products came into force, Moldova was obliged to abandon the use of the name “Cahors”.

The taste is full, velvety with a long finish. The aromas of strawberries, raspberries,
undergrowth notes (smell
of the forest in the fall).
It is well combined with meat dishes, cheeses and desserts, fruits and nuts.

The wine label is decorated by a photo of one of the most famous Moldavian abbeys – Kurki. This abbey was erected on picturesque hills covered with forest, its architectural ensemble includes two churches, nine different buildings, including monastic cells, a large garden and a stone pool. Founded by one of the most prominent rulers of Moldova, Stephen III the Great, for more than two centuries Kurki abbey has been the cultural and religious heritage of the country. 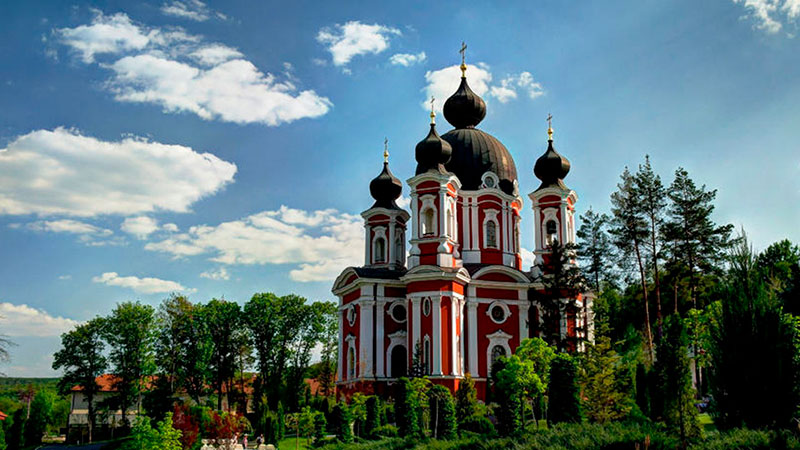 Cabernet Sauvignon is harvested with the maximum accumulation of sugar in berries. It is crushed with separation of the ridges. The pulp is heated to 70 ° C, constantly stirring. After that hot pulp is transferred to a container for languishing and closed tightly. This is done so that it cools down as slowly as possible, because with slow cooling the “weight” of the heated mass occurs, and during this period the aroma and taste of the future wine are laid down. The cooled down to 20 ° pulp C is pressed and yeast is added. When 2-4% alcohol is accumulated in the mash, they are held together with grape alcohol to the content of 16% alcohol by volume.

To make Bostavan fortified, grape spirits use only. As a result the wine gets a balanced mild taste, in which alcohol and sharpness are not felt.

Manufacturer doesn’t add sugar to the wine production. Its high content in wine is achieved by applying the technology of boiling mash, which allows to bring the necessary sugar concentration in completely natural way.